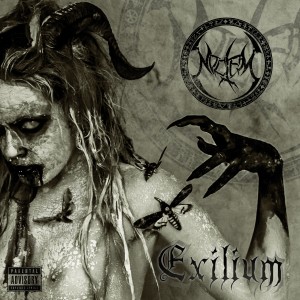 Although Spain is not the first place that comes to mind when thinking of a thriving metal scene, the melodic sorcerers of Noctem have conjured Exilium, a wicked black metal masterpiece that has enthralled the minds and souls of an international audience. I spoke to Exo, founding guitarist of the band, to find out about his Oriental musical influence, his all-time favorite metal records, and what’s behind the intensity of those piercing white eyes.

In the past you have noted that Exilium ends a trilogy that started with Divinity and continued with Oblivion. Do you see yourself continuing to write albums in this manner or would you like to start creating stand-alone albums?

There are a few riffs in Exilium, particularly one in “Decrepit Human Kingdom,” that have a distinctly Oriental flavor to it. Given you are from the eastern part of Spain, would you say that Moroccan and Middle Eastern musical influences seep their way into your songwriting?

Exo: Of course, everything around me influences the sound of Noctem, everything around the band…we really like this kind of harmonic minor scales, [they are] dark and melodic in the same time. We are not Arabs (as many people could think) but we are very influenced by Middle Eastern [sounds].

With so many extreme metal bands emerging around the world, how do you keep this genre of music refreshing and exciting, both for yourself and for your fans?

Exo: You need to have the inspiration and passion inside you, if not you’re dead in the artistic way. I need motivation to write new songs, this flame that keeps me alive you know. So I need my time to get these riffs and melodies in my mind.

One thing that has always stayed consistent no matter how your image evolved is those intense white eyes! Why has that particular imagery always been incorporated in the band? Personally I love it, it’s so intense!

Exo: We want to keep an intense and strong image and we don’t want to lose that, so the eyes are an important part of that, even knowing it’s a pain in the ass to put these contact lenses in our eyes before every show, but we do it because we love this and we want to continue with the same passion we started this band. The flame keeps burning in our hearts.

During Divinity you collaborated with Christos Antoniou of Septicflesh. Are there any other musicians you and/or the rest of Noctem would look forward to collaborating with in the future?

Exo: Of course, but I don’t like to talk about this for the moment because I don’t want to create expectations, it’s very possible we count with collaborations for an upcoming album, but I can’t tell very much about this right now. But of course we’re thinking about it.

Exo: My favourite Black Metal record … “In the Nightside Eclipse” by Emperor, I fucking love this record and the composition of it.

My favourite Heavy Metal record … “Keeper of the seven keys” by Helloween.

Have you had the chance to tour the United States yet? If not, what are your expectations for when you do get the chance to come to America?

Exo: Not yet, unfortunately, but we’re planning to go next year, it would be awesome to tour the States, so many years doing European Tours and now we feel ready for the next step.