Terror takes many forms in heavy metal album covers. The ten albums you see below you manifest in the frightening forms of animated monsters from your darkest nightmares, the gritty aftermath of a death (or multiple), or profound existential fears of loneliness and vastness of time and space, Many of these you will have never seen on a “scary” list before, so have an open mind when viewing this article, and succumb to the darkness within these masterpieces. 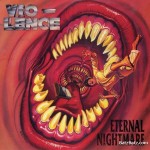 10) Vio-Lence: Eternal Nightmare
What metalhead hasn’t had a dark and twisted dream about either falling or being eaten alive, two of the most common dream sequences to have in general? Now combine them both, plus make the thing that’s eating you have infinite sets of mouths and razor-sharp teeth? Hell no, that’s f***ng terrifying. At this point, this kid is probably just trying to reach down for his bed so he can at least hide under the covers while falling into his eternal nightmare. 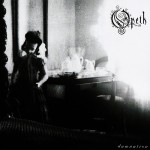 9) Opeth: Damnation
Movies like Chucky, Dolly Dearest, and most recently Annabelle have gotten me and millions of people around the world convinced that dolls are just still-life figures filled with nope. The cover is just as haunting as its music, but what makes this cover even creepier is the fact that Mikael Akerfeldt dedicated this album to his grandmother who died in a car accident while Damnation was being recorded. What was probably meant to be a touching tribute ended up being a work that passively but powerfully touches upon the universal fear of dying. It confounds me that something that was once held 60 years ago as a delightful little treasure perfect for a long-lasting collection is now interpreted as little more than a porcelain harbinger of death. 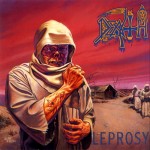 8) Death: Leprosy
Choosing between Scream Bloody Gore and Leprosy has to be the toughest decision I’ve made in writing this list. This poor guy oozes impending doom and limb loss as Ed Repka’s horrifying illustration of a timelessly terrifying disease. As if leprosy wasn’t debilitating enough, the ostracized colony under a blood red sky is a habitat that none of us want to envision being a part of. Repka’s artistic tendencies to make catastrophic backgrounds pale in comparison to the sinister vastness created here. Try staring at this cover while listening to “Open Casket” and “Pull the Plug,” and the combination will have chilling effects on you, I promise. 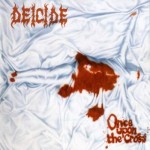 7) Deicide: Once Upon The Cross
Religion has been at the forefront of heavy metal controversy since the birth of the godfathers of Black Sabbath. Sometimes it’s at subtle as a rumor about playing a record like Ride the Lightning backwards and picking up fragments of a satanic phrase. Sometimes, it’s Deicide, who help themselves to a bowl of “Fuck Your God” for breakfast and a heaping plate of “Kill the Christian” for dinner. Contrary to most savage and sloppy death metal blood works, every blood splotch is perfectly placed forcing you to imagine all the exact places in which Christ’s torturers wanted him to experience the utmost anguish, as if His demise was by that of an ordinary serial killer. If Dexter had killed Jesus, we know what it would look like. Compared to the rest of Deicide’s covers, it is rather quiet but still as agitating and violent in imagery and in purpose. 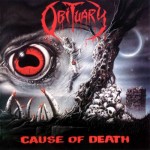 6) Obituary: Cause of Death
Just because this album art is probably one of the most classic pieces of death metal artwork ever doesn’t necessarily mean it doesn’t lose its hellish aura. You can thank H.P. Lovecraft and the remastering skills of Michael Whelan for all the nightmares you will have after staring deep into the blood red eye of that looming leviathan. Turn away from that, and you encounter a grotesquely twisted tree of anguish leaning helplessly on a pyramid of human skulls. Rabid fans of Lovecraft will recognize this artwork from his collection Bloodcurdling Tales of Horror and the Macabre, and death metal fans continue to be bewitched by the fantastical terrors that could only come from the darkest of minds. 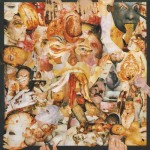 5) Carcass: Reek of Putrefaction
Even a coroner with the most durable of stomachs would turn his head upon the sight of Carcass’s debut album Reek of Putrefaction. Gone are the days of seventh grade “About Me” magazine collages. You get to know everything about Carcass’s mission as a band as you try to hold back your nausea looking at corpses of every race, age, and cause of death imaginable. Heads vomiting limbs, an infant head with no eyes, and a decayed eye. Also, did you happen to notice the deformed head in the middle spewing out what looks like vital organs? It’s like “I Spy” for unimaginably sick motherf***ers like us! 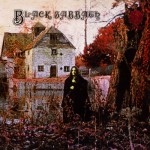 4) Black Sabbath: Black Sabbath
Long gone were the days of malted milkshakes at the sock hop by the time Black Sabbath released their iconic debut album. Though this is probably one of the most colorful albums on this list, Black Sabbath has everything but a welcoming presence. Despite all the warm colors surrounding the Mapledurham Watermill in Oxfordshire, this front cover inhabits a cold, eerie state of being. It doesn’t help that a creepy old crone (who resembles Ozzy almost identically) stands front-and-center, searing her black eyes into your whimpering soul. Behold the black magic of the godfathers of heavy metal: managing to create a timelessly haunting piece that continues to fascinate every metalhead on the planet. It may not be the goriest work on this list, but the work of the musicians who truly know what the genre encompasses cannot be ignored. 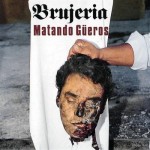 3) Brujeria: Matando Gueros
This picture is as real as your horrified expression right now. This is the head of Mario Rios (according to Wikipedia; trust accordingly), but he is better known to Brujeria and their fans as Coco Loco, who became the band’s official mascot following the release of their debut album Matando Gueros. Why the head was decapitated and by who is unknown, but when this picture first appeared on the Mexican sensationalist magazine “Alarma!” it raised a lot of heads (no pun intended) and the issues of poverty and rising crime rates in Mexico became problems that at least the United States grew to become more concentrated on. The head reminds of something you would find on Carcass’s Reek of Putrefaction (see pick #5), but unlike the medley of vulgarity in Carcass’s work, the artwork forces you to stare at this half-decaying head until the chills running up your spine make you too uncomfortable to look anymore. 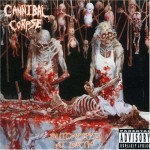 2) Cannibal Corpse: Butchered at Birth
Truly, what would be a list of terrifying album covers without at least ONE Cannibal Corpse record? This album defined the band musically as much as it did artistically. If you are not creeped out by that web of infant corpses and skeletons in the background or by the sadistic ghouls that make Ed Gein look like Mr. Rogers, there is something seriously wrong with you. For me the most terrifying part of this cover is gazing upon the face of a fair maiden and then quickly progressing from wholesome flesh to this wretched, formless bag of bones. The cover may be as sickening and gruesome as its music (“Meat Hook Sodomy” anyone?), but it has still held up as one of the most iconic heavy metal albums in history. 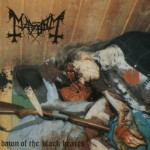 1) Mayhem: Dawn of the Black Hearts
Visions of morbid reality always beat out monsters of fantasy, which is why this ghastly black metal cover tops off the list. The early days of Norwegian black metal were truly defined by the grim and blasphemous crimes that occurred on a regular basis: church burnings and murders of innocents were rather commonplace in this otherwise seemingly peaceful country. Here Dead is pictured soaking ironically in his own blood and brain matter, as the viewer witnesses the aftermath of Per Yngve Ohlin’s suicide. Any normal human being would have called the cops, fainted, or both. What did his bandmates do instead? They used the incident as a marketing point for Dawn of the Black Hearts and wearing fragments of his skull like Audrey Hepburn wears Tiffany’s necklaces. Nothing—not even the courteous note written by Dead prior to his demise (“Sorry for the mess”) —could lessen the impact that this album cover has on its viewers. I bet Mayhem really did cook his brains and use it in a stew.